I once remarked to a friend that for some people, myself among them, The Firesign Theater was as important phenomenon as The Beatles. A little web searching tells me that I wasn't the only one who had that idea.

When I returned home to Nashville after my freshman year at RPI, one of the first things I did was try to buy the first Firesign Theater album, Waiting for the Electrician or Someone Like Him. I was initially unsuccessful; the album was not to be had in all of Nashville, Tennessee. I then ordered it and was told that the regional distributor, in Atlanta, would have to get enough orders for a case of albums (about 25) for them to procure it and then ship it to the record store. I placed the order and finally got my hands on it about six weeks later. That is what is called being an "early adopter."

The Firesign Theater records were, in the jargon of the time, mind-blowing. They essentially invented a genre that was sometimes called "rock-n-roll comedy," and also frequently called "drug humor." But the latter label was also applied to things like Cheech and Chong, which were basically retreads of "dumb guy" humor with a stoner gloss. Firesign was not like that at all. David Ossman, one of the four members of Firesign claimed that their comedy was surrealist humor, with its most identifiable antecedent being The Goon Show, a British radio program featuring Spike Milligan, Peter Sellers, and Harry Secombe. I once heard Ossman speaking lovingly of a Goon Show scene being described as taking place in "An Edwardian Ditch."

The Firesign Theater were David Ossman, Peter Bergman, Phil Proctor, and Phil Austin, and their first album was produced by James William Guercio, who also produced the second Blood, Sweat, and Tears album (the one that sold a zillion copies), The Buckinghams, and the band Chicago, and directed the movie, Electra Glide in Blue. He also produced a Chad and Jeremy album that included the Firesign Theater in some backing vocals. I did not know that when I bought the album, but figured it out soon enough.

The rise of Firesign Theater coincided with the progressive radio phenomenon and would not have been possible without it. Their success spawned a gold rush in record companies searching for comedy groups with a counter-cultural sensibility that could be put onto record. So we also got The Conception Corportation, The Congress of Wonders, National Lampoon's Radio Dinner, the Ace Trucking Company, plus the aforementioned Cheech and Chong. I wouldn't go so far as to say that the success of the National Lampoon was predicated on Firesign clearing the brush, but I'm sure there were some seeds planted in the broken ground and the same audience later made Saturday Night Live a success. Monty Python also had its U.S. acceptance already insured by the pre-existing audience that Firesign had grown. Quite fitting, of course, given the Goon Show antecedent.

I had some direct contacts with members of Firesign, mostly during the faux political campaign of the National Surrealist Light Peoples Party's candidate, George Papoon, in 1976. This was mostly through a member of a group in Berkeley in the mid-seventies that got together to screw around and make stuff up and record it. That group included a former neighbor of Ossman's, and some of our screwing around became part of the local Papoon campaign.

Another friend at that time had worked for KPFA, and had a number of tapes of the "Dear Friends" radio broadcasts (TFT began as a radio show on KPFK, the Los Angeles station of the Pacifica Network, while KPFA was the Berkeley arm), which he gave me. Excerpts from the radio show made up the compilation album, "Dear Friends" but many of them were even more interesting in context.

After "Waiting for the Electrician," the glory days of Firesign include "How Can You Be in Two Places at Once, When You�re Not Anywhere At All," "Don't Crush that Dwarf, Hand Me the Pliers," "I Think We're All Bozos on this Bus," and "Everything You Know is Wrong." After that, various dissentions split the group into three parts, each releasing a solo album, Procter and Bergman, ("TV or not TV"), Austin, ("Rollermaidens from Outer Space") and Ossman, ("How Time Flies"). I think that "TV or not TV" was the only commercially successful one of the batch.

The breakup was described by Ossman as necessary for everybody's sanity, Ossman suggesting that the level of collaboration that they'd reached was hazardous to mental health. But commerce, and the relative lack of success of each of the individual members dictated that the group reformed and toured on an intermittent basis over the next decades, also releasing 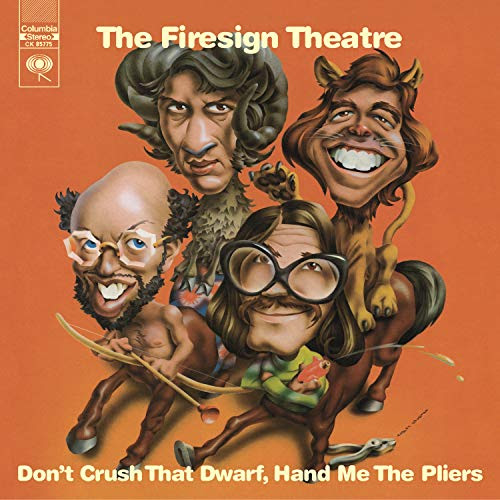 albums, CDs, an occasional single or EP, and the occasional low budget film or TV project. There are a large number of Firesign fan pages on the web, plus detailed descriptions of their projects since the 1970s. A fair amount of the energy behind both is, unfortunately, counter-culture nostalgia. My own place in the matter is probably best illustrated by the fact that the only Firesign CD I have is "Boom Dot Bust," a singularly unsuccessful offering that I liked quite a bit.

Still, it's nice to know that there is still a wealth of later Firesign material that I've not seen or heard. The Firesign shows I've been to over the past thirty years refreshingly refuse to pander directly to nostalgia, bringing in fresh material and referencing the old stuff as points of departure more than slavish re-creations. If I want the old stuff, I'll put Don't Crush that Dwarf, Hand Me the Pliers on the old turntable, find a way to get properly altered, and ponder whether the title refers to Shiva, crushed beneath Kali, reweaving the ply of reality, or the poor little guy on the rolling TV set with the vertical hold knob missing, whose only hope is for us to readjust the picture using the necessary tool.
Posted by James Killus at 2:22 PM

I agree that the Firesign Theater did pave the way for Nat Lamp and Monty Python. (I see Frank Zappa & the Mothers in a similar role.) I actually picked up on Python first as my sister brought me back one of their books from a trip to England.
And I think Mad magazine was the preparation ground for all of them in the US. I cannot recall when I first became aware of Mad, but it was just so mind-expanding to me that there was magazine put out by adults that could get right at the level of my jerky, nerdy, irreverent, juvenile sense of humor.

Other avatars were Ernie Kovaks, Rocky and Bullwinkle, and Jonathan Winters. The general comedy album explosion of the 1950s (Newhart, et al.) were also formative, albeit in a "we didn't want to put out records that you only listened to a couple of times" way.

How many times did I sit behind the wheel of my rusted out '59 Chevy Suburban and mouth the words, "a clean windshield, a tank full of Peppy gas, and a clear road ahead"

Stopped by from Jon's

"..powerful gasoline, a clean windshield, and a shoeshine!"

Python's Yank, Terry Gilliam, came from the poison pen of Mad Magazine and it's underlings (if only he'd done work for Ed Sanders "Fuck You" magazine!).

Python is derivative of UK radio and TV majors, the Goon Show being the primer.

Having said that, I wish like F!!! I knew where the hell Firesign came from. Released on a major label? That's like Columbia signing Johnny Winter for a record Record deal.

Damn, Scorcese! Where's your take on this movie waiting to happen?

My only regret is that we felt like we needed to be high -- of course, we usually were -- to listen to and enjoy Firesign back then.

The material stood on its own!

"Pliers" and "How Can You Be...?" were the Ulysses and Finnegan's Wake of our generation, or maybe vice versa.

I do sometimes wonder whatever became of Mutt & Smutt, but not very often.

How much can a freight broker make?

Learn how this guy created his business with NO EXPERIENCE and now does over $2,000,000 per month in sales.

All thanks to FREIGHT BROKER PROFIT$.