The Duck as Spirit Guide

I’m not sure when I first began to take the duck as my animal spirit guide.

Of course the Carl Barks duck comics informed my childhood, as did Daffy, Bugs, and Elmer. Sure, I saw portions of Duck Soup on afternoon television, and later in its entirety, and “Why a Duck?” resonates, as does the duck that comes down and gives you a hundred dollars (or as I later joked, the Groucho Marxist duck that comes down and give everybody a hundred dollars, and hey, wait a second, didn’t Congress just talk about doing that?).

But if I had to pick a point in time, it would probably either be the first time I saw the Dillard’s album, Tribute to the American Duck.

Or when Howard first walked in out of the swamp in Man Thing comics, later to star in his own magazine, tempting many a comics speculator to folly. 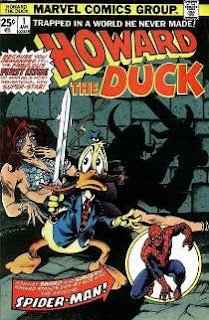 By the time I got to Berkeley, I was committed to the idea that you could not go wrong by following the ducks. This was sorely tested by the discovery of some old issues of a comic called Super Duck that had been published by Archie Comics in the late 1950s, but in the spirit of true believers everywhere, I soon concluded that he was neither super nor a duck.

So, crisis of faith averted, when my apartment mate at the time, Steve Ellner pointed out a show that was at U.C. Berkeley by some comedy group named Duck’s Breathe Mystery Theater, I was bound to attend.

A little later, I commissioned Dan Stefan to do a faux movie poster: Duck Savage. It’s too bad I don’t have a scan of it (or permission to show such a scan), because it’s really choice quality stuff, as is Wendy Lindboe’s piece, Drakula.

And, of course, I have various decoys, little sculptures, etc. of ducks, generally in some sort of tableau with a like number of Godzilla’s, plus the occasional rooster, just to keep it real.

Like I say, I think that you can do a lot worse than following ducks. Oh, and the real ones have a really cool “Quack!”

I made it a point to collect all of the HtD books except #1.
The only other post-Fabulous-Furry-Freak-Bros comic I ever cared about anyway was Dr. Strange, and now I are one!

You might also want to look at Skip Williamson's blog.