Robert Mapplethorpe was a major figure in 20th Century photography, in the same league as Diane Arbus, Ansel Adams, and others who transformed photography from a bastard child into an acknowledged venue for fine art. That Mapplethorpe’s lover, Sam Wagstaff was also a major patron and advocate of photography as fine art helped to accelerate the speed of the transition, and amplified Mapplethorpe’s influence, as did his friendship with such icons as Patti Smith.

Mapplethorpe came of age during the first flowering of “gay culture” as a publicly acknowledged and accepted part of American society and the arts. Prior to the late sixties, and seventies, it was generally understood that some areas of the arts and culture had a substantial homosexual representation (fashion, theater, and dance especially, plus those parts of pop culture that were called “camp”) but since homosexuality was usually illegal, and generally frowned upon as such, pretense and appearances were maintained and closet doors remained closed.

But after such things as the infamous “Stonewall Riots,” in New York, and a general softening of strictures about sex generally, part and parcel of “The Sixties” and “The Counterculture,” the “love that dare not speak its name” took to shouting its name into bullhorns for a while, at least in certain safe venues such as New York’s Greenwich Village and San Francisco’s Castro District.

Some of Mapplethorpe’s most famous (perhaps notorious would be a better word) photographs, was his “X, Y, and Z Portfolios”, quasi-documentary records of the time and its practices, the most infamous probably being the self-portrait with a bull whip in his anus. Other photos of the time are less shocking, but still charged with homoeroticism.

Then came Lady, Mapplethorpe’s photographic study of the body builder Lisa Lyons. This work may have single handedly created a new cultural image of feminine beauty. Previously, two female body types dominated the public imagination, the “never too rich or too thin” ideal of the fashion model, and the soft curvaceousness of Marilyn Monroe, Jane Mansfield, or Bridget Bardot. Lyons fit neither of those patterns; she was neither thin nor soft. Suddenly, the “hard bodied” female burned itself into the public eye. And with Mapplethorpe’s eye for light and shadow, that body became Hellenic, even Olympian. The Battle Babe was finally given the body whose form fit the function: that of challenging men physically as well as in other areas of endeavor. Lyons’ legs looked strong enough to kick a door down, and her arms looked like they could throw you across the room. The only question was how much you’d enjoy it.

I saw the traveling Mapplethorpe show when it came to the U.C. Art Museum some years back. This was the show that wound up being tried for obscenity in Ohio in 1990 as another battle in the Culture Wars. It also came just a year after Mapplethorpe himself died of AIDS. One of the most striking photographs in the show was another self portrait, Mapplethorpe facing the camera holding tightly to a cane with a death’s head skull at its top.

Self Portrait of Robert Mapplethorpe But there was another aspect of the show that I found quite ironic. Between the sex of the earlier period and the death images taken when he knew he was dying, there was a period when he seemed to have photographed flowers almost obsessively. The irony is multi-layered. Those who brought the obscenity charges against the show confined themselves to just five photographs, no doubt because they knew that the rest of the exhibit was uncontroversial; even the nude photos of Lisa Lyons, well dang, she’s a woman, and naked women are part of what art galleries are supposed to be about. The flowers would have just confused everything.

But within the chronology of the Mapplethorpe’s life’s work, it seemed as if he became tired of the obvious and the raw, just as adolescents and young adults (most of us anyway) eventually become tired of the hunt and the frenzy and eventually settle down to a quieter existence. The Amish even plan for it, with Rumspringa, the time for sowing the wild oats. Contrariwise, the strictest upbringings produce the wildest breakouts; Mapplethorpe himself was raised Catholic, and observed that he turned every still life into an altar. Even a dolt of a preacher could use the example of Mapplethorpe as a metaphor for trying to return to grace through the natural beauty of the flower portraits. 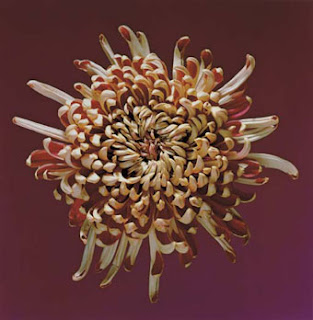 For a Romantic, apostle of sex and death, an early end is not premature but salutary. Would that it have happened to tedious Wordsworth.

Thanks for interesting article, i looking for this information very long!

If you need your ex-girlfriend or ex-boyfriend to come crawling back to you on their knees (even if they're dating somebody else now) you got to watch this video
right away...

(VIDEO) Get your ex back with TEXT messages?

Robert Mapplethorpe was bisexual. The biography on him by Patricia Morrisroe is an essential read.