Just a little blogging about the blog here. We just recently had our first 1000 visitor day, of which roughly 900 of them were folks glancing at the Mapplethorpe essay. I'm guessing that either Mapplethorpe or Lisa Lyon appears as subject matter in some art course somewhere, and we get a flash crowd whenever it shows up during the school year. None of them ever seem to click on the Google ad, though, so there's no money in it for me, yet. Dang, don't they understand that the Google ad will find them a better school, or something?

We also have another minor infestation of Randites in the Coda thread. I find the entire matter more than a bit interesting. In some circles, they're called "Randroids," which is clever, but implies a sort of robotic affect (the philosophical equivalent of Asperger's Syndrome, perhaps) that is diametrically opposed to the in-your-face nothing-but-personal-attack-and-insults style that we've all come to recognize. Also, most of the Rand traffic here should be for the John-Galt-is-a-Slan essay, since I did a little shilling for it recently. Yet they gravitate towards the Rand Contra Ayn Rand Institute essay and invariably miss the point (despite it being right there in the title) that I'm saying Rand would disagree with the Ayn Rand Institute, and that the Ayn Rand Institute is actually preaching collectivist guilt and nationalistic retalliation (in advocating deliberate, preemptory attacks on civilian populations). One might almost think that Randites believe in magic words or something.

There also used to be actual Randites, as I recall, people who at least took some effort to try to present arguments and logical constructions. This current crew doesn't even seem to know how to read, which makes the whole "This was the most important book I ever read" thing a bit problematic. Did they have it read to them, like my second grade teacher read us The Wizard of Oz? Which contains some fine philosophical speculation, incidentally.

I've also just posted what I think is the best chapter in Blood Relations over on the Serial Novel Sister to this blog. And that reminds me that I was in the middle of some more sophisticated philosophical speculations on Stochasticism and Parallel Universes, but I seem to have gotten…Oh, look! A Woman with a Snake! 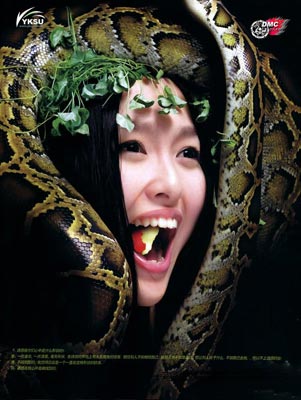 From where I sit (admittedly a whole ocean away) a lot of the "randites" appear to be no more than dyed-in-the-wool neo-conservatives/religious righters who cherry pick Rand as they would the bible, to confirm opinions they've already formed.

Just as their ideological brothers conveniently forget all these biblical injunctions about not eating shellfish or mixing wool and linen but still like to bash homosexuality...

Congrats on your first 1000 visits day by the way!

My current Ads by Google offers Dentistry at Hayden Park. Clicking the link (that should net you a sou or two next time you check) confirmed my worst fears — a dental practice in Scottsdale AZ possibly specializing in snowbirds from the rust belt (Free whitening for life!!). Google's almighty content analysis algorithms have apparently decided this is a place to hang out and yell at clouds.

I forgot! Woman with a Snake!— With a Bite of Apple!!!

I'm guessing that the dentistry ads are holding over from my wisdom tooth extraction essay a couple of weeks ago.

It also occurs to me that the randite cherry pickers may well be from the group with a "reading protocol" John Barnes describes and I review in "Maybe It's That Simple." Barnes calls it "Dip and Flip," whereas I suggest that it's basically a form of functional illiteracy. Either way, it would translate into reading (for example) Atlas Shrugged by glancing at each page, searching around on that page for something that connects emotionally with the reader, then skipping to the next page.

And that does sound a lot like the way fundies read the Bible, doesn't it?

Get professional trading signals sent to your cell phone daily.